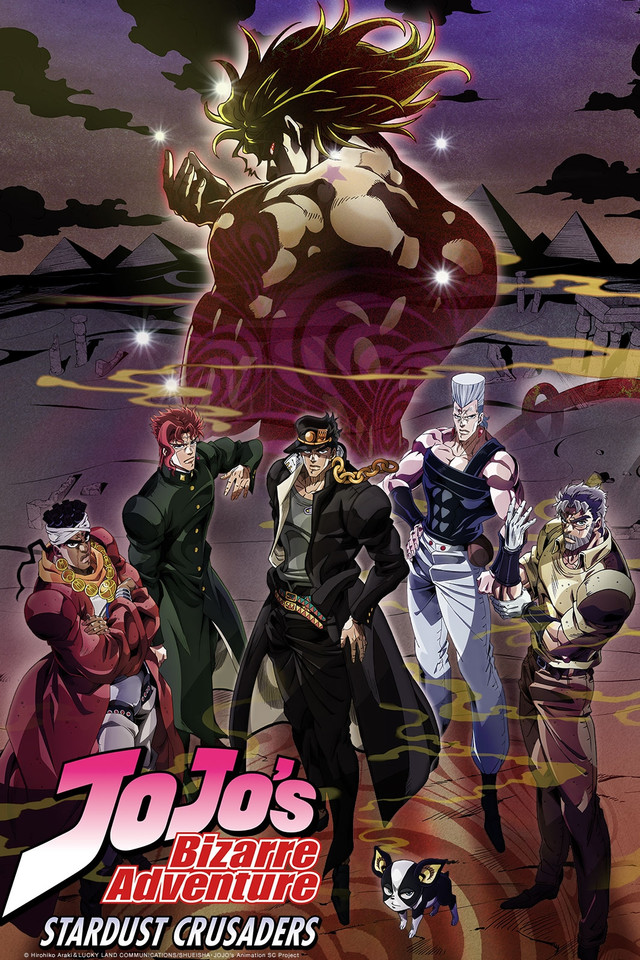 Part I "Phantom Blood" and Part II "Battle Tendency": a woman is forcefully kissed, against her will. In another scene, a character peeks through a keyhole to watch a character bathe without her permission or knowledge. In episode 12, there is a scene where multiple women with baskets of food are groped and have their skirts lifted during a 'cavity search.' Part III "Stardust Crusaders": a young woman is almost raped by an orangutan, but she is saved. A character's sister is murdered, and a bystander claims that she was also raped. It is later implied that her attacker raped numerous women before her, as he claims that he had many girls who 'loved and admired' him, her being just one of them. In one scene, two men's bodies become magnetised, causing them to become caught in sexually suggestive poses. This is played for laughs, and they are fully clothed. A character is transformed into a child but retains the body of an adult man. He is bathed by an adult woman and is shown hugging her (clothed) breasts and clearly enjoying the experience. An antagonist forces lip contact with a woman (E2). One of the main characters has a backstory involving the rape and murder of his little sister (E5). Part IV "Diamond is Unbreakable": a serial killer is said to have raped, mutilated and murdered young boys. At one point, a flashback of one of the boy's corpses is shown. It is implied that a teenage boy transforms himself into other people in order to have sex with copies of his crush; he explains that he only does this because he does not have the 'courage' to force himself on her. A man and a young boy are shown in a bath together; at first glance, this is a normal scene because they are father and son. However, the scene takes on a disturbing tone when it becomes apparent that the older man is actually a serial killer posing as the boy's father. Part V: a flashback includes a professor who attempted to groom a young boy, with implications that he had sexually assaulted him before. In episode 17, a man harasses a woman who is alone on a train. His Stand forces itself onto the woman. The character's arms are shown and sounds are heard throughout. This narrative is continued throughout the episode as the woman becomes pregnant with the child of her attacker. In episode 34, all the protagonists switch bodies, and one of them keeps trying to scratch his testicles (i.e. his vagina now), and it angers the woman whose body he is in, who forces him to stop. In episode 36, an implied rapist swapped bodies with the cop who was arresting him, and uses it to harass a woman.
If this listing is incomplete or incorrect please feel free to suggest an amendment through the site’s submission form.