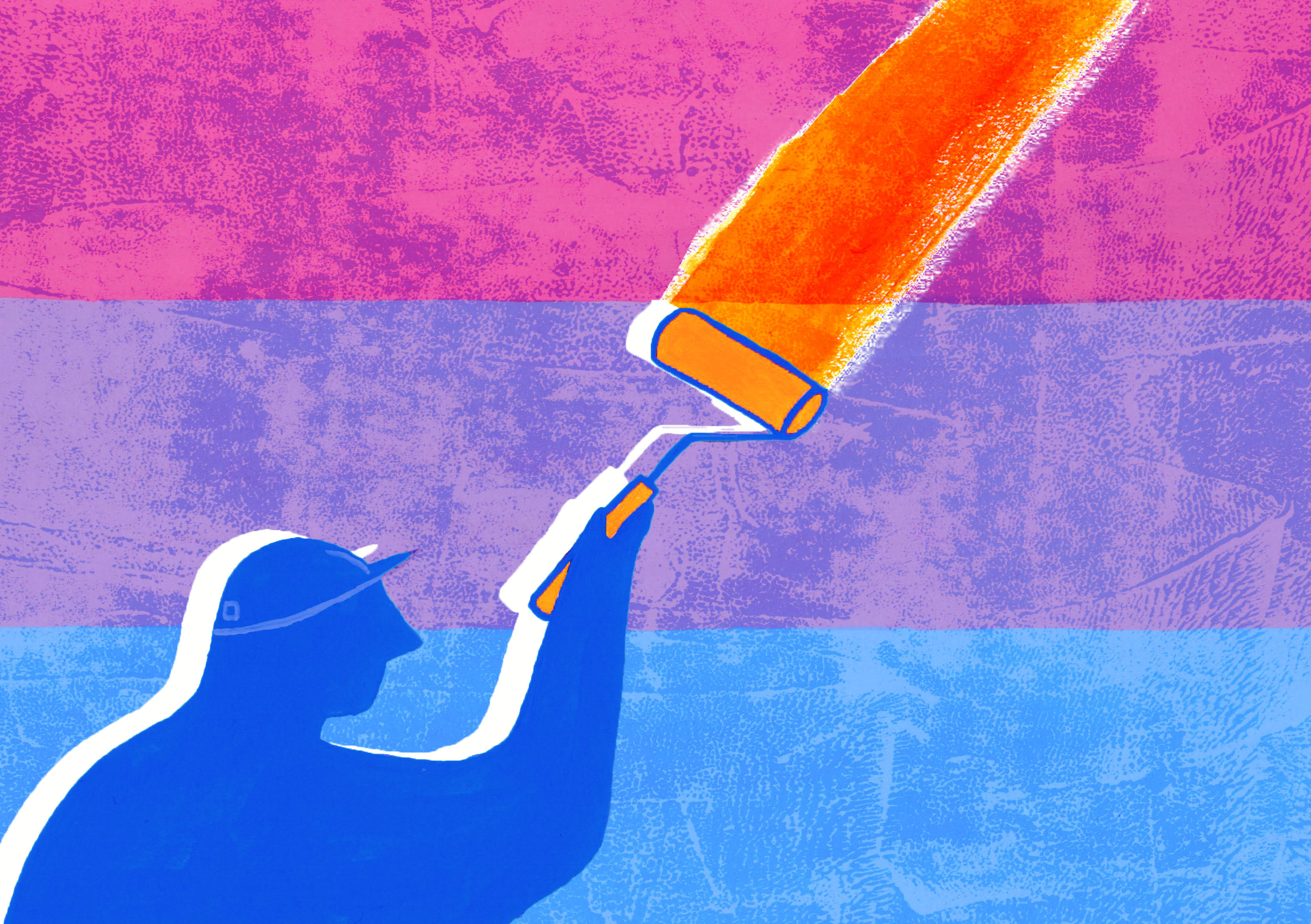 What comes to mind when you think of Orange is the New Black – the catchy theme tune? Orange jumpsuits and sex scenes? A window into the oppressive incarceration system of the US? An impressively diverse cast and a willingness to tackle upsetting and controversial topics? Or simply that it’s amazing to binge-watch? Whatever you might love about the award-winning Netflix comedy-drama, there is one thing that won’t come to mind – and that’s the word ‘bisexual’.

Despite being rightly celebrated for depicting characters with a whole variety of sexualities, gender identities, ethnicities, and socio-economic backgrounds (the list could go on), OITNB refuses to include a character who self-identifies as bisexual, even though the protagonist, Piper Chapman, is attracted to both men and women. By refusing to call Piper ‘bisexual,' the creators of the show could have taken the opportunity to protest the need to ‘come out’ and assume a specific label in our heteronormative society.

But the creators of the show not only missed this opportunity, but also the chance to use Piper’s character to tackle the bi-erasure which is prevalent in the entertainment industry and throughout society. Instead, they added to the problem. Although never portrayed as confused herself, Piper’s friends and relatives are evidently left perplexed, as are the show’s viewers. Piper is referred to as ‘shallow’, ‘straight’ and even an ‘ex-lesbian’ – her husband Larry laments ‘She was not a lesbian anymore, not with me. You know? Then she’s in prison, what, a few weeks? Bam! A lesbian again. Or bi? I don’t even know.’ Larry’s confusion echoes my own thoughts when watching the show – why would the creators of OITNB, while so keen to explore a diversity of human experience and tackle damaging stereotypes, happily allow bi-erasure to overshadow the love life and sexual identity of the main character?

A person’s sexuality (or indeed a character’s) can never be presumed. I recognise that many people reject labels and have the right to do so. I, like many others, would rather live in a world where we do not have to categorise our emotions, sexual activities and relationships for the simple reason of being recognised and understood. However, the scared and confused twelve-year old version of myself was very relieved when a google search threw up the word bisexual – here was a name for what I was feeling, and a whole community of other people who felt the same. It was valid, it was acceptable, and it existed. I didn’t have to break up with my boyfriend at the time and tell everyone I was a lesbian. I could like both.

But since then, I have faced bi-erasure on a number of occasions, the most surprising being the time I first went to a gay club with another friend of mine, who also happened to be bi – within 5 minutes of being there, a stranger had confidently assured us both that ‘bi people don’t exist’. Another time, I was told that as a woman, I shouldn’t go to Pride with my boyfriend, because I was ‘straight-passing’ and therefore was too privileged to attend. As well as disregarding the fact that straight people are welcomed at Pride events, this comment denies bi people a place in the LGBTQ+ community, and ignores the fact that bi people face a number of problems of their own, not just half the problems faced by a gay person. For instance, bi women are often met with the assumption that they are straight, and just experimenting, whereas bi men are assumed to be gay, and just coming out as bi as a stepping stone – the assumption at the root of these stereotypes being that everyone claiming to be bi is, in fact, simply attracted to men. Bisexual people of all genders are labelled as being confused, easy, desperate, greedy, liars and attention seeking alongside a number of other problematic prejudices. ‘It’s just a phase’, ‘you’ll grow out of it’ and ‘you’re just saying that because it's trendy’ are common responses when you come out as bisexual, even to people who seem relatively thoughtful and accepting. According to Stonewall, 5% of bisexual men have attempted suicide compared to 0.4% of all men. 50% of lesbian and bisexual women under the age of 20 have self-harmed in the past year, said another Stonewall study, compared to 1 in 15 generally.

The decision to use the word bisexual in a Netflix series, or to avoid it, may seem like a triviality in light of these troubling statistics. But media representation can be an incredibly valuable tool in raising awareness and dispelling harmful myths and preconceptions. Accurate, nonbiased discourse in media and the rest of society is necessary for all members of the LGBTQ+ community to access the health care and social support they require.

If my twelve-year-old self had come across a bisexual character on TV, I wouldn’t have gone through so much turmoil and self-doubt. If the man in the club had been exposed to messages validating bisexuality as a sexual identity in the media, he may have been less inclined to erase the identity of my friend and I. If bisexuality, alongside the huge spectrum of non-heterosexual identities, was recognised as legitimate, bisexual people would not face workplace discrimination, higher rates of mental health problems and higher suicide rates than their heterosexual counterparts. Bi-erasure breeds biphobia and discrimination. Creators of shows and films, especially those which already deal with issues of queer-phobia, sexism, racism, inequality and other prejudices as comprehensively as OITNB, cannot simply be complicit in bi-erasure – they have a responsibility to fight against it.

Share on
< Is The Future Female in Blade Runner 2049?
Rape in the Media: A Survivor's Perspective >
subscribe to our feed

Violence and Identity in The Americans
Law and Order: SVU, Rape Survivors, and the Justice System
Content Warnings, Parental Ratings, and the Conflation of Sexuality and Sexual Violence
The Under-Represented Impact of Stalking
Mindhunter and Toxic Masculinity
“This is my own obituary.” – The testimonies of US gymnasts assaulted by Larry Nassar
The Man in the Shadows: the myths about rape that our popular culture tells us
How we define rape is problematic and this is why it needs to change
Is The Future Female in Blade Runner 2049?
Rape in the Media: A Survivor's Perspective